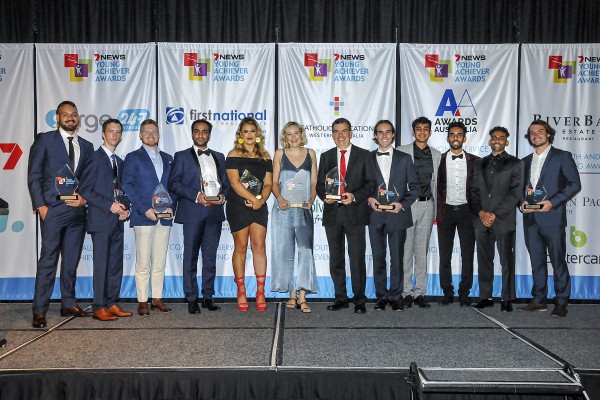 Sophie Stewart, 26 of Burswood is the Campaign Director working with guidance from Aboriginal chairpersons for Social Reinvestment WA, a coalition of not-for-profits working to end the over-representation of Aboriginal and Torres Strait Islander people in the justice system. They released a podcast amplifying lived experiences and launched an initiative, ‘Olabud Doogethu’, resulting in new jobs and reduced burglaries. During Covid-19, Sophie coordinated 36 organisations to ensure the safety of people inside WA prisons and at-risk young people on the streets. Sophie is also the Founder and Director for Swim for Refugees, a non-profit that teaches people from the refugee and asylum seeker community to swim.

Sophie Stewart, 26 of Burswood is the Campaign Director working with guidance from Aboriginal chairpersons for Social Reinvestment WA, a coalition of not-for-profits working to end the over-representation of Aboriginal and Torres Strait Islander people in the justice system. They released a podcast amplifying lived experiences and launched an initiative, ‘Olabud Doogethu’, resulting in new jobs and reduced burglaries. During Covid-19, Sophie coordinated 36 organisations to ensure the safety of people inside WA prisons and at-risk young people on the streets. Sophie is also the Founder and Director for Swim for Refugees, a non-profit that teaches people from the refugee and asylum seeker community to swim.

Andrew Bannister, 29 of Sorrento was born with rare brain malfunctions, including Periventricular Nodular Heterotopia (PVNH), but these have not stopped him from achieving many things. Inspired by the story of Ella, whose mother organised to light up the Perth Bell Tower in 2018 after Ella died of PVNH, Andrew decided that he would organise to light up more locations to bring awareness to the condition, and later, of all rare diseases. In 2020, Andrew organised 35 landmarks in Australia and around the world to be illuminated for Rare Disease Day in February. He has already organised for 50 landmarks to be illuminated for Rare Disease Day 2021.

Tegan Reder, 17 of Cloverdale is the only swimmer competing in Australia under the S11 category, a classification for blind swimmers. She was born completely blind but has never let this prevent her from achieving her goals. At the Western Australia Championships, she broke eight Australian age and open records. Currently sitting third in the world for the 50-metre breaststroke, she will be trialling for the Tokyo Paralympics in June in Adelaide. Tegan was awarded a scholarship through the WA Institute of Sport and is part of the AIS Para-Development Squad. In December 2020, she was granted early acceptance to study Law at UWA in 2022.

Trevor Menmuir, 25 of Derby works as the Senior Youth Services Team Leader for the Shire of Derby/West Kimberley. He co-ordinates, plans, supports, and organises a range of Youth and Community-related activities and programs, including engaging in sports and delivering healthy food programs for kids and families. Trevor is Chair of the Youth Network Meetings and the Youth Representative in the Derby Interagency Meetings. He is responsible for voicing issues and concerns for the youth and coordinating programs and solutions in the Youth and Community space. Trevor is a founding member of the Derby Basketball Association He previously worked as the Aboriginal and Islander Education Officer at Derby District High School.

Hamish McKirdy, 26 of Salter Point is a third-year Agricultural Science PhD student at Murdoch University. He has closely aligned his research to address wine industry needs and identify areas of concern, such as moving away from traditionally used agricultural chemicals. As a result, Hamish co-invented two new pest control technologies. The first involves the application of ethyl formate and nitrogen both as quarantine and post-harvest fumigant. The second is the application of synthetic amorphous silica dust as both a trunk drench and foliage spray. Hamish received the Wine Australia Award from the 2020 Science and Innovation Awards for Young People in Agriculture, Fisheries and Forestry.

Eldin Rostom, 26 of Salter Point is passionately empowering the next generation of medical entrepreneurs. After receiving a scholarship with Accelerating Australia to participate in the Perth Biodesign Project Hospital to generate insights about clinically unmet needs, Eldin was first placed in the Burns Unit of Fiona Stanley. He then attended a short intensive bootcamp in Eyes, Ears, Nose, Throat medical innovation at Stanford University. In 2019, Eldin spun out both ideas from his experience, co-founding two start-ups: Calor Medical, which aims to standardise first aid methods for burn injuries, and Diag-Nose Medical, which aims to combat antibiotic resistance by reducing antibiotics over-prescription for common respiratory diseases.

MAN UP of Wembley Downs hopes to create emotionally capable, purpose-driven young men. Founded in 2019, MAN UP is an organisation run by young Perth men, for other young men. They aim to redefine what it means to ‘man up’ by providing small, workshop-style sessions with groups of young men. They hope to change the attitude, approach and language around modern masculinity and allow high school boys to embrace positive ideals over toxic ones at an early stage. MAN UP’s main target audience is middle-high school age young men in years 9-12 but they run sessions at residential colleges in addition. They also run community check-in sessions.

Kiya Watt Aboriginal Art of Albany is creating art that is reflective of her people and their creation stories, and that strengthens cultural connections in her community. Kiya is a proud Menang Gnudju Noongar artist who specialises in murals, corporate commissions and cultural art workshops. She launched her artistic journey after her twin sons had a NAIDOC event that required them to work on a project together. Kiya’s work has since included the first Indigenous doll to appear on Playschool and a line of earrings that feature animals belonging to the Menang Boodjah land. Kiya Watt Aboriginal Art has been featured in New York Fashion Week.

Tom Wheeler, 25 of Newman is the Manager of Waste Services at the Shire of East Pilbara. He and his team have made significant changes to the treatment process of the Newman Wastewater Treatment Plant after its operations were suspended. Tom identified the source of the issue through data analysis, conducted a water balance model and identified the best method for a clean-out. Tom and his team received the Waste Authorities Waste Sorted Grant, which will engage community members in adopting better waste management practices through tools translated into Martu Wangka, the language spoken by the Custodians of Newman. They also received e-waste collection infrastructure funding.