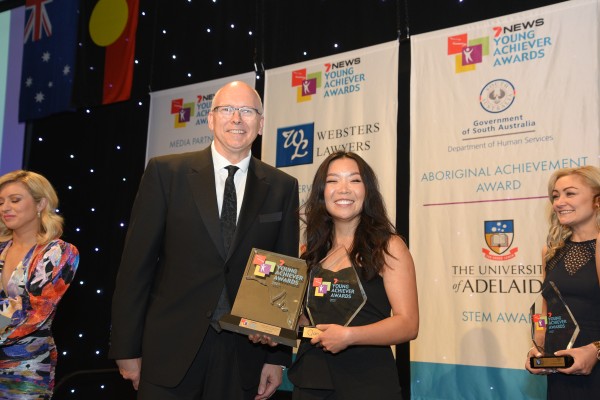 Dr Trudy Lin 28 of Kensington Park is one of only five registered specialists in Special Needs Dentistry in Australia, providing oral healthcare to people with disability, psychiatric illnesses and complex medical issues. A graduate of Bachelor of Dental Surgery, Trudy became a Senior Dental Officer at the Special Needs Unit, Adelaide Dental Hospital in 2017. She completed her Doctor of Clinical Dentistry in Special Needs Dentistry Program and Advanced Diploma in Nutrition in 2020. During Covid-19, she self-funded the establishment of a Supported Independent Living facility for people with disability to live in the community. Trudy will be receiving an honorary title with the University of Adelaide.

Dimity Bullen-Nicholas, 28 of Surrey Downs is an Ambassador, Board Member and Community Advocate for Cystic Fibrosis South Australia (CFSA). She has run 9 half-marathon to raise funds and awareness for Cystic Fibrosis. She works with staffing teams to reduce the risk of complications and created a mentorship program for struggling teens to help them understand their illness. She has worked with committees to get life-saving treatment approved in Australia and get CF recognised by the NDIS. During the Covid-19 pandemic, she helped raise over $80,000 for CFSA. Dimity runs an online business, “Delivering Flowers”, allowing her to work from home and hospital due to having CF. 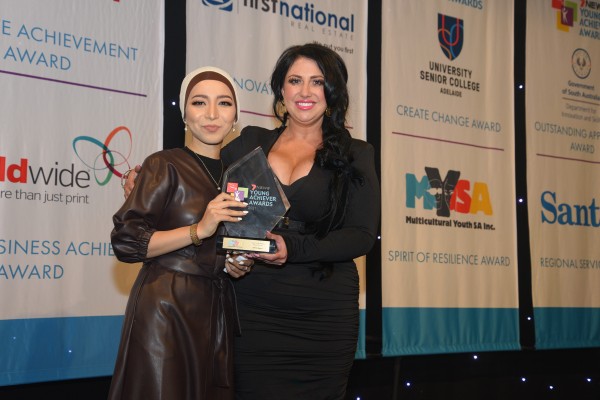 Zahra Bayani 24 of Salisbury is dedicated to helping those in need. Zahra fled Iran, where she faced discrimination, bullying, harassment and racism. She arrived in Australia with no grasp of English but turned her life around. Zahra currently studies Bachelor of Physiotherapy (Honours) at the University of South Australia. She has been President of the Rotaract Club at Thebarton Senior College and has been a Mentor/Director at the Rotary Youth Leadership Award and Rotary Youth Program of Enrichment. She is a Mentor at Spire Coaching, developing leadership skills for students to become valuable members of their communities and a First Aider at St John Ambulance. 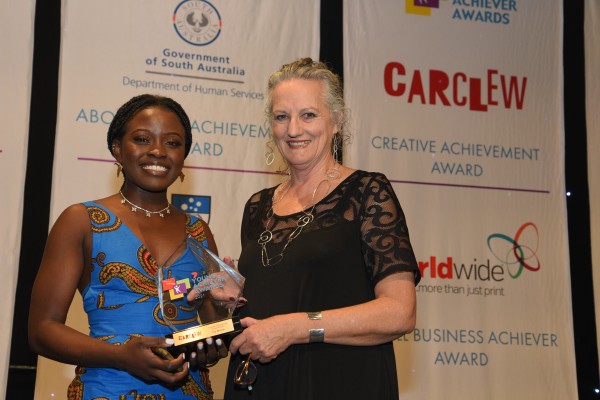 Elsy Wameyo 21 of Newton is a writer and composer known for her single “Outcast”, which won an award at the 2019 South Australian Music Awards. She wrote Outcast as a 17-year-old confused young black girl who didn’t know where she belonged. Its music video included the African Community, showcasing the power, intelligence and beauty of black individuals. After receiving a grant from Carclew, she purchased a home studio and learned to produce tracks. She is currently working on her debut extended play. Elsy was named 2018 Young Kenyan of the Year. She won People’s Choice Best Hip Hop at the South Australian Music Awards. 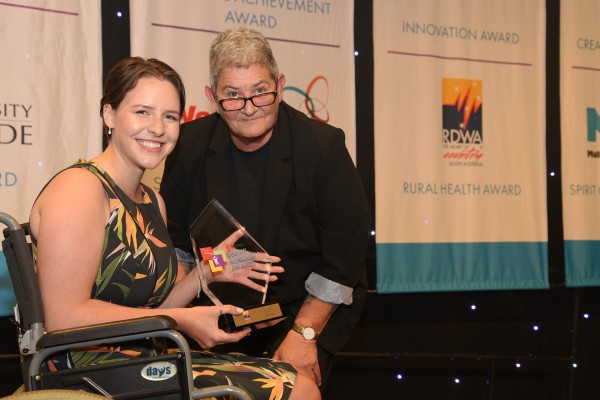 Tessa Deak 21 of Mount Gambier is a passionate advocate for those chronically ill/disabled. In 2018, she hosted a Myalgic Encephalomyelitis (ME) Awareness Night to spread awareness about her disease and what it’s like having them. She started the Chronic Illness Support Limestone Coast, which began a Facebook group. They hold catch-ups and coordinate events such as the Wellness and Wellbeing Festival. Tessa founded and chaired the Festival, which showcases local products, businesses and services to support different aspects of wellbeing. Tessa was Headspace Youth Ambassador for two years. She currently leads the “Just Relax: Let’s Talk About Disability” Project, focusing on disability awareness and education.

The University of Adelaide STEM Award 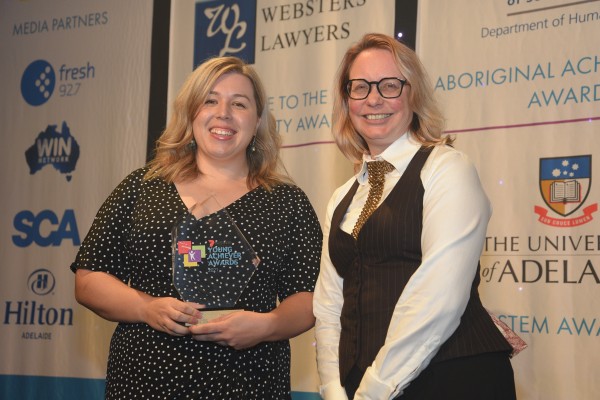 Kate Secombe 28 of Norwood is in her final year of PhD in Medicine at the University of Adelaide (AU). She completed her Bachelor of Science (Biomedical Science), receiving two Outstanding Academic Achievement awards. Aiming to improve the quality of life of people with cancer, Kate is working on a method to predict who will develop gastrointestinal toxicity from their treatment using the individual’s unique microbiome. This could help reduce the side effects of cancer treatments. Kate has completed a Postgraduate Research Internship at Bright Arena. She has published 11 peer-reviewed papers and won a Fellowship to do research at the U.S. National Institutes of Health. 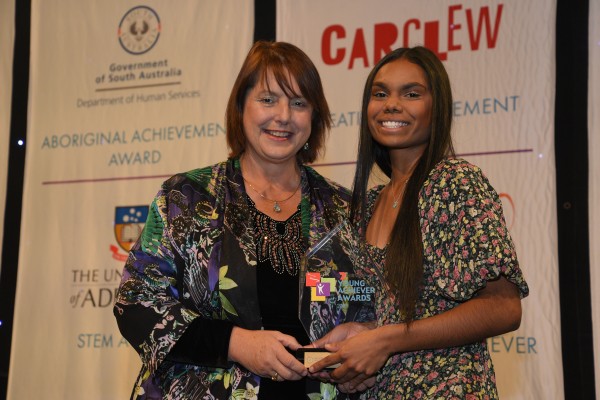 Shantae Barnes-Cowan 17 of Whyalla is a young Adnyamathanha woman. She has made her onscreen TV debut and was recognised as one of the Rising Stars for 2019 by the Casting Guild of Australia. She has served as Indigenous Literacy Foundation Ambassador for South Australia. In 2018, she travelled to Melbourne with other students to promote the importance of literacy to Aboriginal children. She was a guest speaker at the NUNGA Screen opening event. She has played netball and basketball at state level, has acted in a coaching capacity to support other local sportspeople and even received the 2018 NAIDOC Female Sports Person of the Year. 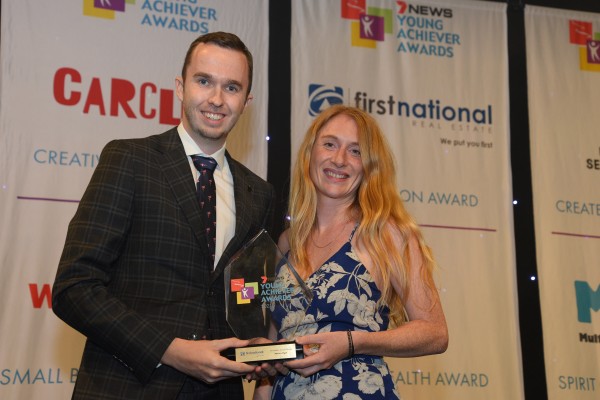 Marion Vigot 29 of Adelaide is focusing on sustainability. Marion is a French serial entrepreneur who is the co-founder and CEO of Close the Loop Solutions. Her first sustainable portfolio brand is Mister RYE, the first rye-drinking straw to contribute to the circular economy. She recently launched Compostable Alternatives, a radically transparent platform supporting restaurants and cafés, introducing innovative and truly compostable solutions to single-use packaging and takeaway. Marion is the first international female entrepreneur to be granted a place in the Supporting Innovation in South Australia Entrepreneur Program. She is a Board Member of Startup Adelaide and Co-President and Coordinator for La French Tech Australia. 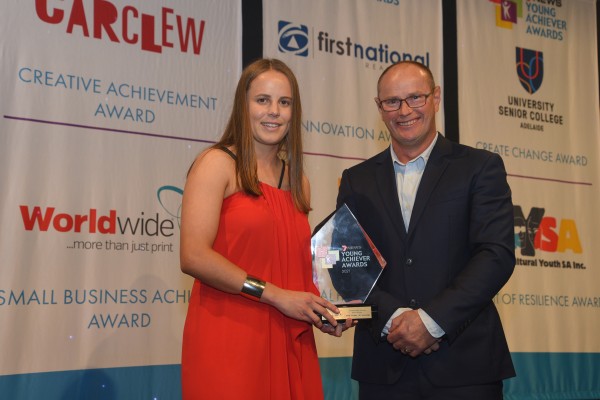 Emily Condon - EC Advantage 22 of North Plympton is dedicated to altering the mindset of individuals through innovative training and realistic technical skill sessions. Emily created EC Advantage, with a focus on developing female athletes through strength and conditioning and soccer skill sessions. She offers personal training, injury prevention training, and specialised soccer skill sessions. She aims to understand the gaps and stigmas of female athletes not wanting to be viewed as ‘bulky’. Before launching her business, Emily completed Certificates III and IV in Fitness, Paul Chek courses and ASCA Certificate on Strength and Conditioning. Emily is a soccer player who has previously played for Adelaide and Australia 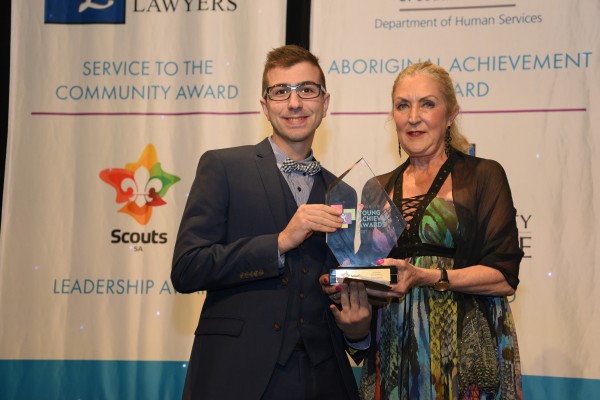 Sam Capurso 29 of Glandore is passionately promoting inclusivity in the teaching and learning of mathematics. Sam ceased offering accelerated classes and instead introduced an Extension Class in Years 7 to 10 for students with high potential. The restructure required Sam to undertake an extensive change in management process with staff, students and families. He is also thinking of offering senior mathematics as aspiration-focused, reducing the stigma associated with taking courses for students with vocational aspirations that are viewed as ‘lower end’. Sam is on the Executive Committee of the Mathematical Association of South Australia (MASA), where he writes resources and facilitates workshops at conferences nationwide. 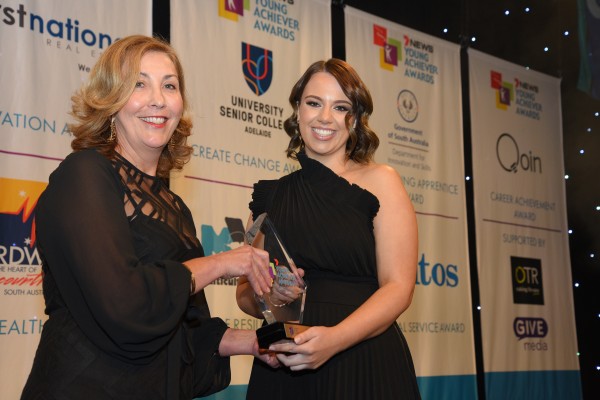 Zoe Thomson 25 of Salisbury has been a volunteer for Talk Out Loud for five years, where she has been a leader at six Youth Empowerment Camps and planned fundraisers and social events. She has performed in a Fringe production called 41 Seconds. In her most recent initiative, Camp Tembo, Zoe facilitated the 2-day camp to inspire, empower and start conversations of girls aged 11 and 13 to reduce the stigma of mental health. Zoe is currently a Support Services Officer at Headspace Adelaide whilst studying a Bachelor of Social Work. She was previously employed at Helping Young People Achieve (HYPA) as a Young Employment Consultant. 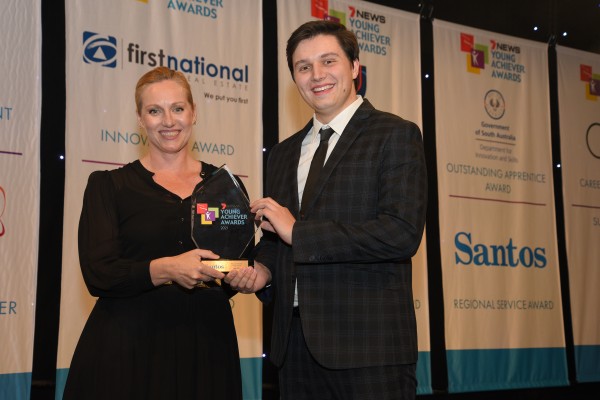 Jack Gill 21 of Evanston Park is focused on promoting sustainability, arts and civic involvement. Jack has been involved in the Gawler Youth Advisory Committee, providing youth-based insights to Gawler Council and ensuring that the town has the younger population and future residents’ concerns in mind. He is running a Bike Month Campaign in April to engage residents in the benefits of carbon-neutral transport. Jack was one of the Youth Representatives on the Gawler Climate Emergency Action Plan Working Group and a Gawler Delegate to the National Climate Emergency Summit 2020. Jack has commenced his Master of Science (Environment and Sustainability) at the University of Adelaide. 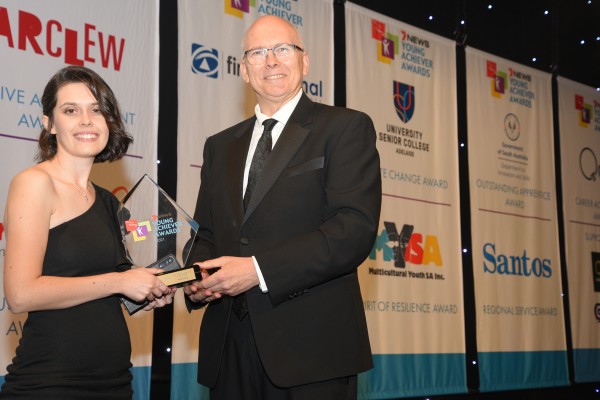 Kelsey Wade, 21 of Renmark undertook VET in SACE and completed a Certificate III in Media, leading to graphic design, which is her primary career goal. She has pursued subjects in the Arts to gain solid foundation for knowledge and skills. She undertook a part-time traineeship at a local agency whilst studying Certificate III in Business. She was approached for apprenticeship at Print DNA, a local printing firm, being the only graduating student interviewed for the position. She started her Apprenticeship as a Certificate III in Print Communication and is now in her last year. Kelsey was a 2020-2021 LIA SA Graduate of the Year finalist. 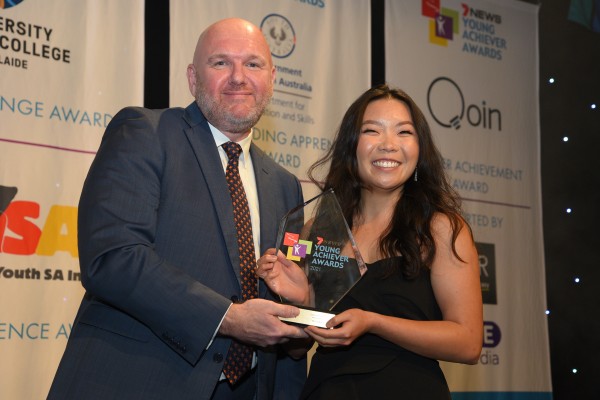 Dr Trudy Lin 28 of Kensington Park is one of only five registered specialists in Special Needs Dentistry in Australia, providing oral healthcare to people with disability, psychiatric illnesses and complex medical issues. A graduate of Bachelor of Dental Surgery, Trudy became a Senior Dental Officer at the Special Needs Unit, Adelaide Dental Hospital in 2017. She completed her Doctor of Clinical Dentistry in Special Needs Dentistry Program and Advanced Diploma in Nutrition in 2020. During Covid-19, she self-funded the establishment of a Supported Independent Living facility for people with disability to live in the community. Trudy will be receiving an honorary title with the University of Adelaide.